The difference between cacao and cocoa

Cacao vs cocoa! The million-dollar question: what is the real difference between cacao and cocoa? Is it just a different spelling for the same word? Is cacao a Spanish word and cocoa the English equivalent? The answer is no, they are two different words referring to different products that share some similarities. Stay with us and learn the easiest way to differentiate between Cacao and Cocoa so you will never doubt again and you won’t have to wonder which one is which!

So, here is the deal. Some people use the words interchangeably and there’s certainly debate over when to use which word, but hopefully, this guide will give you some clarity and conviction. Cacao and cocoa actually have a lot in common, because… well, chocolate! But there is a difference and context which helps determine which word to use when. Cacao is a type of tree or an unprocessed fruit, while cocoa is a powder or substance obtained after subjecting cacao to industrial or transformational processes.

In short, the real difference between the two lies in their origin: cacao is natural and cocoa is a product or by-product obtained from processing cacao in some way.

Cacao is the common name for Theobroma Cacao, a tree that produces large pod-shaped fruits, each containing between 20 and 60 seeds that are often referred to as beans.

The cacao fruit has the same name and is characterized by a brightly colored pod filled with seeds covered by a whitish, fibrous pulp. These seeds are extracted from the pods, fermented and then dried. At this point, they have been transformed into cocoa beans. These cocoa beans can then be processed into powder form or used as starting material to make chocolate. 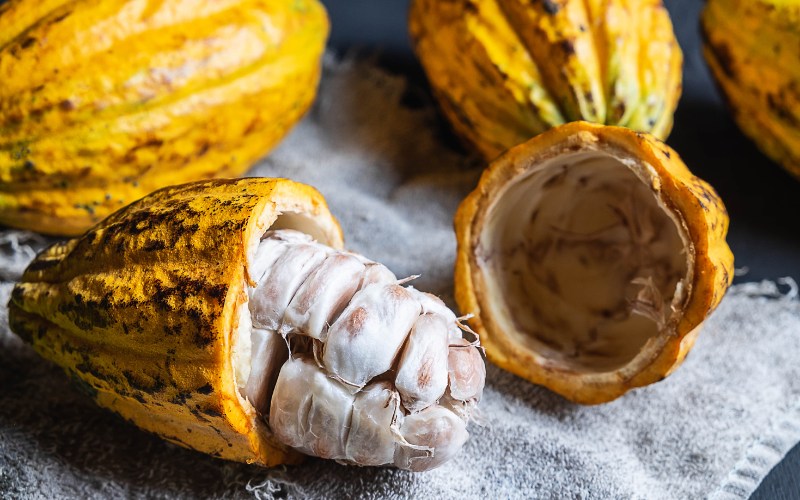 There are multiple records that show the consumption of infusions and drinks with cacao in Mesoamerican culture. For the Maya, cacao was used to make a drink exclusive for the nobility and was consumed as early as 1750 B.C., according to the findings of Mexico’s National Institute of Anthropology and History (Instituto Nacional de Antropología e Historia de México).

Although there is no doubt about the use and consumption of the cacao fruit in Mesoamerican culture, it is not very clear if the Olmec and Mayas were pioneers in its cultivation.

There is a hypothesis that suggests that cacao was brought from South America to Mesoamerica by humans. In 2013, at the Meeting of Amazonian Archaeology held in Ecuador, evidence was presented of the cultivation and commercialization of cacao from 5,500 years ago in a region currently part of Ecuador.

For the researchers, this not only proves that cacao cultivation is much older than previously thought but also demonstrates the importance of cacao as a product of commercial exchange.

Cacao is currently grown in equatorial countries around the globe, the most prominent being Côte d’Ivoire, Ghana, Colombia, Ecuador, Venezuela and Mexico. 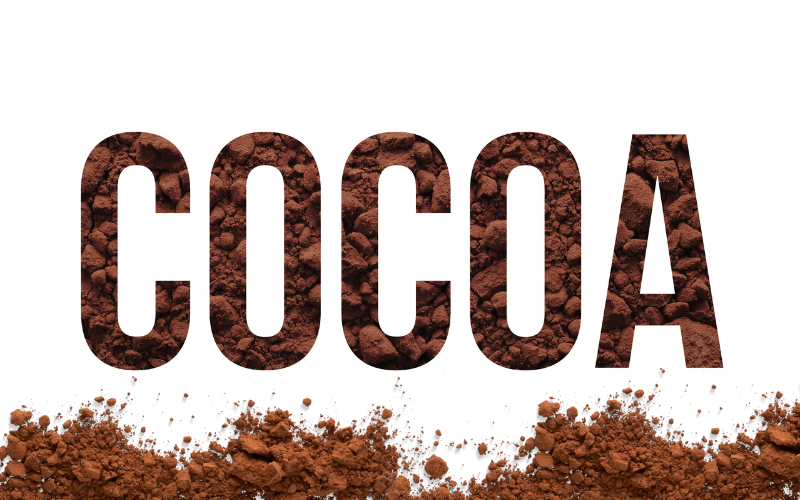 Cocoa is a powdered food product, produced after processing cocoa beans to extract most of their fat, called cocoa butter. Cocoa powder is used as a base for the manufacture of chocolate drinks, sweets or chocolate-flavored foods, or as a decorative element in confectionery.

There is no clear origin as to the etymology of the word. However, one of the most widely accepted hypotheses states that it is due to a pronunciation error: when the English colonists arrived in America and discovered cacao, they did not know how to pronounce it correctly. Instead, they found it easier to say “cocoa”, so for a long time, cacao and cocoa were used synonymously.

With time and the industrialization of cacao, a distinction was made between the plant (cacao) and the products, such as powder obtained from its processing (cocoa). 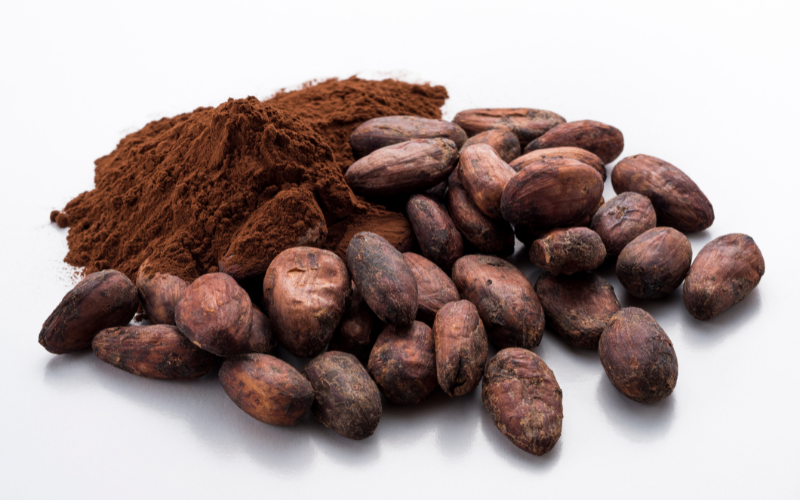 Beverages made with cocoa used to be very bitter. Eventually, sugar, milk and spices were added and the drink transformed into something more similar to the chocolate drinks we know today. However, the traditional process used to prepare the chocolate was very inconvenient, as it required boiling and skimming the cocoa to remove the fat (cocoa butter).

In 1828, the Dutch chemist Coenraad Von Houten patented a hydraulic press system to transform cocoa into a very fine powder with a low percentage of cocoa butter. Thanks to this method, cocoa powder became a mass-consumer product, in the form of instant beverages or as a base for preparing solid chocolate.

Today, an alkalinization process is used and other ingredients, such as sweeteners, stabilizers or preservatives, are added to cocoa powder to improve its flavor or prolong its shelf life.

We hope that we have been able to help clarify this great debate about differentiating CACAO and COCOA. 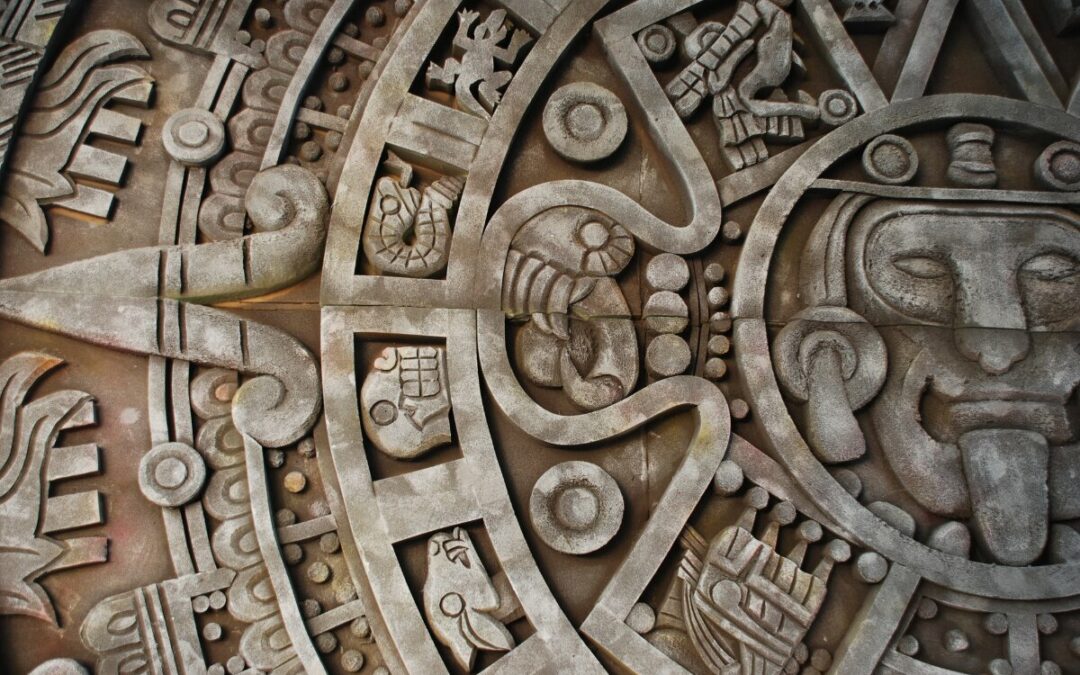 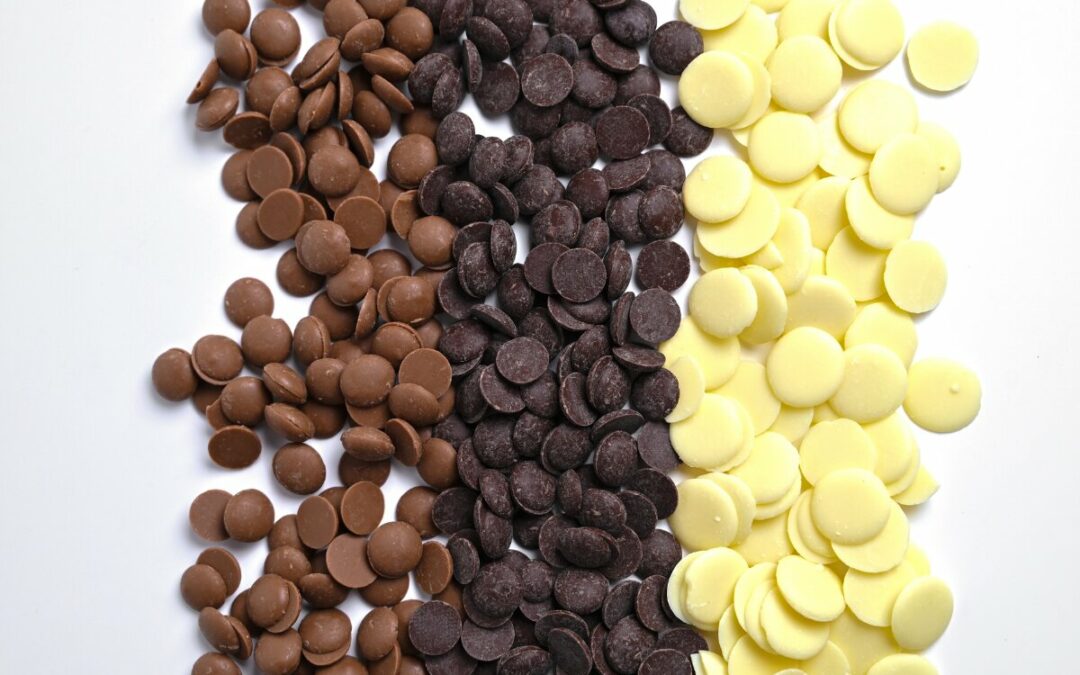